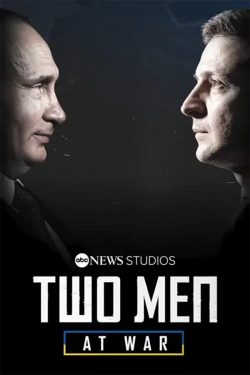 The title really says it all. This hour-long documentary focuses on the early lives, political careers, and psyches of Ukrainian President Volodymyr Zelensky and Russian President Vladimir Putin. It tries to make sense of who these men are and the events and decisions that led them and their nations to the largest armed conflict in Europe since the end of the Second World War.

This is a who’s who of foreign policy experts, starting with anchor George Stephanopoulos, one of the most seasoned and respected broadcast journalists working today, who landed the first interview with Putin before the Sochi Olympics. Interviewees include former Trump National Security Advisor John Bolton, Pulitzer Prize winner Anne Appelbaum, ABC Chief Global Affairs Correspondent Martha Raddatz, and Nina Khrushcheva, a professor of international relations at the New School and granddaughter of former Soviet Premier Nikita Khrushchev.

With his invasion of Ukraine, Putin has upended a global order that has existed since the end of the Second World War. Part of why you’ve seen so much outrage around the world is that a full-scale invasion of one sovereign nation by another for the purpose of territorial expansion was long thought to be a relic of a bygone era. The nakedly imperial designs Putin has on Donetsk and Luhansk–not to mention the 2014 annexation of Crimea–genuinely shocked world leaders.

It is worth noting that, despite the Cold War and conflicts in Bosnia and Kosovo, Europe has experienced an unprecedented period of peace and stability since 1945. The generational trauma of the Second World War, particularly in countries like Poland, is something most Americans cannot understand because our nation was largely spared the horrors and destruction of that war. For Europe, though, Putin’s invasion has reawakened collective memories of the devastation of European cities and the decimation of its people.

Rather than focusing on the collective impact, however, this documentary is about two people in particular–Zelensky and Putin. Stephanopoulos does a fantastic job of digging into the biographies and psychological profiles of these two men who, in so many ways, bear responsibility for bringing us to this turning point in world history. Looking at Putin’s origins as a poor kid in Leningrad (the once and future Saint Petersburg), his fascination with spy movies which led him to a career in the KGB, and his unexpected and unlikely rise to the top is informative, and the insights from those who have met, known, and studied the man help unravel the enigma.

Equally interesting is the biography of Zelensky. The archival footage provided of him on the Ukrainian version of Dancing with the Stars and his sketch and satirical comedy career remind us that this man is, in every way, the unlikeliest president. Yet Zelensky is no mere clown, as those interviewed make a point of stressing. He is shrewd and ambitious, but also a thoughtful man. While many express astonishment that he rose to the occasion the way he has—Zelensky was not living up to his campaign promises before the invasion—in the context of his political rise (running a populist campaign against the emerging Ukrainian oligarchy), perhaps we should not be surprised.

The producers, Stephanopoulos, and the interviewees do a fantastic job of tracing these two men from their births in the Soviet Union down the divergent paths they and their countries took following the collapse of the eastern bloc in 1991. In doing so, they chart the origins of this conflict from the final days of the USSR and the very different experiences and affinities these two men had in and for it. This is important, as Putin has made clear his ambition is for a return of the old Soviet empire.

Yet, as Zelensky and the Ukrainian resistance show, not everyone in the former Soviet Union shares Putin’s affinity for Russian domination. The Ukrainian people wanted to be free before being conquered by the Soviets, and their language, culture, and people suffered as a result. The roots of this struggle go back to 1921, when the Soviet-Ukrainian War resulted in the establishment of the Ukrainian Soviet Socialist Republic and the end of any hope of Ukrainian nationhood until the 1990s.

Knowing this, Putin should not have been shocked by the resistance Russian forces met. Yet one of the most surprising aspects of this war has been just how badly Putin miscalculated. The documentary does not explain why—in part because most experts are still trying to figure out the answer to that themselves—but does make clear that, win or lose, the invasion of Ukraine will forever be known as “Putin’s folly.”

This war does not look like it is going to end anytime soon. Responsible citizens should have an understanding of not only what is happening, but why. While you won’t get all your answers from Two Men at War, it is definitely a smart place to start.

With a few (mild, as these things go) images of the war, this is not one for little kids. Pre-teens should be okay watching this with a responsible adult, and it may be a good chance for parents to talk about the war with their children and address any fears they may have. But make no mistake, this documentary was made with history and political buffs in mind.

Skylar Baker-Jordan is a freelance writer with expertise in British and American politics and pop cultures. His work has appeared at The Independent, Huff Post UK, Salon, and elsewhere. He currently resides in Tennessee with his dog, Jackson Montgomery, and his cat, Erica Kane—both named after the iconic super-couple from All My Children.
PrevPrevious PickEverything Everywhere All At Once
Next PickParallelsNext