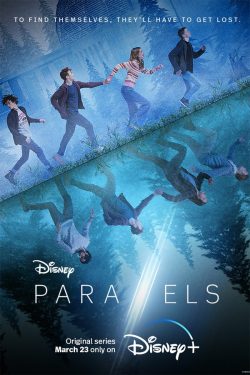 Parallels follows the twisting journey of four teens–Romane, Sam, Victor, and Bilal–who are separated by a sudden glitch in spacetime while partying together in an abandoned bunker.

Finding a TV show your entire family can agree on is challenging. Fortunately, Parallels recently dropped on Disney+, so the bickering can end.

With a teen boy and a tween girl in my house we typically spend all evening offering up viewing options only to have each of them shoot down the other’s request. Whatever the boy wants to watch, the girl doesn’t. And vice versa. But the time traveling aspect of Parallels combined with the lack of Marvel characters (we’ve forced my daughter to sit through most of the MCU against her will) were enough for the pair to begrudgingly try an episode.

The premise of Parallels may sound difficult to follow, but the series explains it well enough as it goes. The four teens at the center of the story—Romane, Sam, Victor, and Bilal–are spending the night in an abandoned bunker celebrating Bilal’s birthday when there’s a glitch at a nearby research facility where his mom works. Romane and Victor disappear, while Bilal is replaced by his 30-something adult self. Sam, the sole survivor of the teen foursome, rightfully freaks out.

Meanwhile, Romane and Victor find themselves alone in a parallel universe, where they live for four years with survivor’s guilt. Eventually, the older versions of Roman and Victor travel back in time, where they meet up again with Sam, still 14, and the now-30-year-old Bilal. As the new foursome try to right the original universe and get back to their correct timelines, they make matters worse by not heeding the sage advice of Bilal’s mom, who tells them to stay put and not talk to anyone, especially family. But they don’t listen because they’re teens (at least at heart for Bilal) and haven’t seen Back to the Future, or any time-travel film, apparently.

You should also know that Parallels is a French production shot in France with French actors speaking French. But don’t let that freak you out. The fact that this is a French show made my kids more interested in watching, not less. It’s different! It’s not New York! Not Marvel! I also loved the idea of exposing them to a different culture and film style beyond Hollywood. Today, Parallels. Tomorrow, Le Jetée! We started with the English dubbing, but my son is taking French next year so for fun we switched to the original French with English subtitles. Watch it in French! The English dubbing is fine, but the American voiceover actors do not convey the same emotions as the original actors.

The series was created by Quoc Dang Tran (Marianne) and Anastasia Heinzel (Beyond Appearances) and is the first French production on Disney+. Tran, who also co-wrote the series with Heinzel, said to Variety that he wished to “tell a fantastic story about teenagers, at an age when you leave innocence and the bonds of friendship are unfailing.” Special effects were not the driving focus of the show from the beginning. Instead, Tran wanted to focus on the emotions and relationships of the characters. The show succeeds at this. Parallels has relatable, flawed characters, with the exception of Naidra Ayadi’s Sofia, who is one cool single-mom physicist. Thank you, Tran and Heinzel, for writing a strong, complex, intelligent, and awesome mom. Despite the sci-fi elements, at the core Parallels is a story of friendship and parental love and how nothing, not even other universes, can break the bonds between those who deeply care for each other.

Parallels has been compared to Stranger Things, but that is misleading. Parallels is not a horror. There is quite a bit of comedy in the show, especially in the later episodes as Naidra Ayadi has more screen time. There’s a hopefulness to Parallels that is desperately lacking in Stranger Things. And my tween watched Parallels with no fear of nightmares. Honestly, Parallels is closer to the German show Dark on Netflix, but not as mature and less, well, dark.

There are only six episodes, each one being between 30-40 minutes. Totally binge ready. However, I recommend pacing yourself. If you space them out over the week, that’s six nights of no fighting about what to watch in your house. No amount of time traveling can replace that peace.

If you’re tired of arguing over what to watch with your older kids, this twisty French time-travel show should give you something to agree on.

As mentioned, this is a good one to put on for a family with multiple-age kids who can’t agree on what to watch, although anyone with an affinity for supernatural YA could also get into it.

Parents of impressionable teens, do not fret. The only alcohol is a bottle of champagne (this is France, of course), which is broken before any imbibing can happen. And what the shows has of romance is an almost first kiss that fails to connect, as it happens at the exact time the two of them are thrust into different timelines. Chris Cookson is a novelist and short-story writer specializing in Young Adult fiction. As head of the Writers Department at InkTip she helps screenwriters connect with established producers to sell their scripts. She also co-runs Novel2Screen, a blog devoted to covering TV and film adaptations of books. You can find her on Twitter: @ACCooksonWriter.
PrevPrevious PickTwo Men at War
Next PickThe Unbearable Weight of Massive TalentNext